I ordinarily don’t write much about my personal life in my newsletters. My job is to talk about business growth – and while there are plenty of parallels between what we do at work and what we do at home, I prefer to keep personal examples to a minimum because everyone’s experience is unique, and the specifics of what happen to me might not be relevant to you. But I’m making an exception this month. This is a personal story, and there’s nothing in this article that will help you build a better business. This is simply a thank you note to all of the people who got my daughter here alive.

I won’t go into every detail, but here’s a quick summary – when my wife was 8 weeks pregnant we discovered that our daughter was dealing with a pretty rare type of blood incompatibility. Basically, antibodies on my wife’s blood were attacking and destroying our daughter’s red blood cells before they could properly form. Blood incompatibility issues are somewhat common, but the type we were dealing with isn’t – only around 1,000 of them happen every year, out of several million births – and our local doctors had zero experience in dealing with it. The Internet quickly taught us that our daughter would die before she was born if we didn’t do anything to treat her and might die anyway, and that was exactly as fun to learn as you can probably imagine. It took us about two months to find people who knew what we were dealing with, which was a sobering experience.

But eventually the course of our pregnancy became clear – weekly ultrasounds to measure the speed of the blood flow into our daughter’s brain (which it’s a miracle you can see on an ultrasound, by the way), which would tell us whether or not she was becoming dangerously anemic. If she crossed a certain threshold, my wife would need to undergo a medical procedure to inject donated blood directly into the umbilical cord, and then repeat the procedure every 2-3 weeks until finally, hopefully delivering at 37 weeks – past that, the risk of our daughter staying in the womb was too great. But if any of those procedures failed, we would need to deliver earlier.

So my first thank you is to Dr. Radha Cherukuri, who performed the vast majority of our weekly ultrasounds to determine if and when we would need to look into transfusions. Not only did she keep us sane as we held our breath every week to see where things stood, but she also put us in touch with Dr. Ken Moise at the University of Texas Medical School, who has spent his career working with alloimmunized pregnancies and whose advice and counsel were invaluable. A special thank you as well to his assistant Ryann Wynn, who talked us off the ledge more than once as we bombarded her with questions about possible scenarios and how to best prepare ourselves for what might come. I’d also like to thank Dr. Daniel Wechter, who filled in for Dr. Cherukuri when she was away at a medical conference and who is a remarkable man in his own right – a former monk turned doctor who, along with his saint of a wife, have adopted or fostered over 30 children.

Eventually it became clear that transfusions were going to be necessary, and so my wife and I made regular 2-hour trips to Ann Arbor to meet with an army of specialists at the University of Michigan’s Children’s Hospital. Special thanks to Dr. Elizabeth Langen, who was the first doctor we met in person with extensive familiarity with our situation and how to handle it. Knowing that we would be in skilled hands was enormously relieving.   My wife eventually needed three transfusions, and I can’t even count all of the doctors, nurses, phlebotomists and technicians who helped us survive each of those – but the biggest thanks of all goes to Dr. Marcie Treadwell, who performed each transfusion flawlessly and with an exceptional understanding of how psychologically exhausting the experience was for both my wife and me. I don’t think I’ve ever been as comprehensively impressed by a doctor’s skill and compassion as I am with her.

Next on the list, and a close second to Dr. Treadwell, is Dr. Brian Tesler, who came into our lives around week 27 as my wife’s new OB when we transferred care to a hospital with admitting privileges at our regional NICU. He talked us through the delivery, rearranged his schedule to make sure we could see him as often as we needed to, and advocated for my wife to have the option to try for an induced delivery and avoid the recovery of a C-section, which we hadn’t even known was possible until about three weeks before it happened. He and his team were patient, empathetic, crazy responsive, eager to help us make the best of a bad situation, and willing to do what was best for us rather than what was easiest for them, which is not always the way things work.

We knew our daughter would need to spend some time in the NICU, and so I’d also like to Dr. Nwankwo Martin and Dr. Serge Thurin, who counseled us on what to expect during our stay there and who directed her care for the 8 days she spent there. I’d also like to thank Cassie, Amber (I’m sorry I don’t know your last names!) and the dozen or so other NICU nurses who cared for our daughter during her stay. Having a child in the NICU is very stressful, and the entire team at Covenant made it as easy as we could have hoped.

And last, but absolutely not least, I need to thank my wife for being so unbelievably strong during this entire process. This was a grueling pregnancy – entirely stressful, entirely devoid of the joy and excitement we had both experienced with our son’s pregnancy and were expecting to have again with our daughter – and it was capped off by an equally grueling 54-hour labor (yes, that is the right number). We both had several moments when we were not certain our daughter was going to make it here. And while my wife had low moments and occasionally questioned whether or not she could keep going, she handled all of it with more grace and poise than I thought was humanly possible. I have never been more impressed by anyone in my life than I was watching my wife give birth to our daughter, and I expect that opinion is going to stand for the rest of my days.

So thank you, to those I’ve mentioned and to the many nurses and doctors whose names I have forgotten or never learned. This note is a poor reward for the gift you’ve given me, but it’s the only thing I have to offer. That, and promising to raise my daughter the best way I know how, although full disclosure – I was planning to do that anyway.

Thank you, all of you. My little girl is here because of you, and nothing I can say here will come anywhere close to conveying the full depth of my gratitude. But here’s a picture. She will hate this when she is older, but she looks almost exactly like her brother. 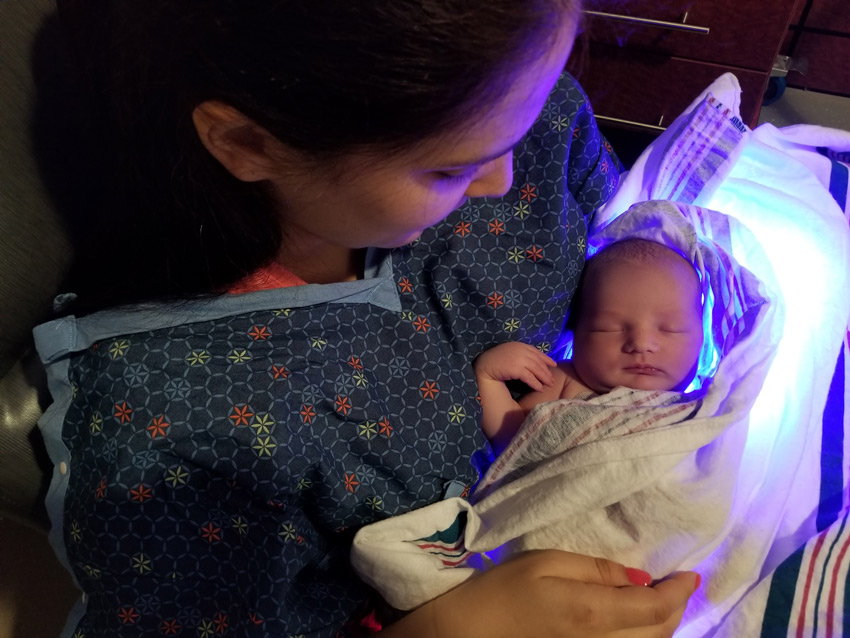